Why Hiring Managers Should Favor Drive Over Intelligence 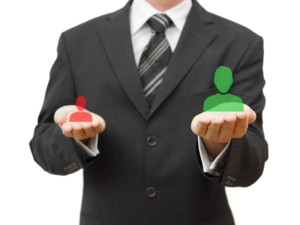 When choosing between several highly desirable candidates, hiring managers face a complicated decision, and have to weigh a variety of factors to determine which one offers the most potential. Do they choose the Harvard graduate who spent his early career at McKinsey? Or should they pick the candidate with the infectious personality and can-do attitude, even though she’s the product of a lesser-known business college?

All too frequently, the manager will discount the attitude and emphasize the pedigree. But although there’s great value to hiring Ivy League-educated professionals, the tendency to prioritize the degree over attitude can cause employers to miss out on many great candidates.

Which is a better indicator of success? Intelligence or Attitude?

As you build your team, you should consider attributes like attitude, motivation and personality to be critical data points. Indeed, they may be even more important than intelligence. According to new research from psychologist Carol Dweck, attitude is a better predictor of success than IQ.

Dweck says there are two types of attitude mindsets: fixed and growth. Those with a fixed mindset tend to place a higher value on looking smart, which leads them to avoid challenges and give up easily when obstacles are placed in their way.

Those with a growth mindset, on the other hand, have an insatiable appetite to learn, so they view obstacles as opportunities and are able to envision multiple paths to solving a problem. This kind of innovative thinking and drive trumps intelligence, Dweck found. Those with a growth mindset were more likely to succeed than those with a fixed mindset, regardless of their IQ. There are plenty of examples of successful people who didn’t let obstacles stand in the way of their journey. Travis Bradberry, author of Emotional IQ, notes that Oprah Winfrey, Henry Ford and Walt Disney all persisted in the face of failure. They likely had growth mindsets.

Focus on understanding a candidate’s attitude, passion, motivation and drive.

To avoid losing out on such candidates, hiring managers should gather insight that helps them determine whether an applicant has a fixed or growth mindset. Make it a priority to ask questions that help you understand attitude, passion, motivation and drive.

This line of questioning will provide the data you need to re-sort your applicants. Rather than bucket candidates according to intelligence, you can organize them according to type of mindset. With this approach, you’re less likely to miss out on some really great candidates – the ones who’ll contribute the most to your organization.