2 Degrees of Separation: The Value of the Trusted Network 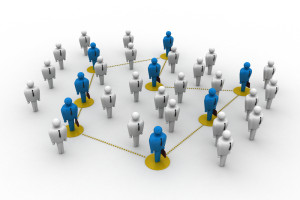 Remember Six Degrees of Kevin Bacon? The goal was to find the shortest link – in six or fewer steps – between the actor and any other Hollywood personality. Players quickly discovered that the connections usually turned out to be close ones.

Search Google for almost any actor’s name combined with the phrase “bacon number” and you’ll find that nearly all come up with 3 or less. In fact, according to the Oracle of Bacon website, the number of actors with a Bacon Number in that range is nearly 1.7 million out of a possible 2 million.

Another way of looking at it: Kevin Bacon is connected to nearly everyone in Hollywood. That’s not the same as saying he’s meaningfully connected to all of them. But more on that later.

While Hollywood might be a world unto itself, it’s also an industry like any other. So this closeness of connections isn’t entirely unexpected. As both recruiters and job candidates know, most industries are – practically speaking – small and intimate. For the most part, we know or know of everyone in our business, simply because we travel in the same circles.

When two professionals share an industry or region, there’s a very good chance they’re connected by three or fewer degrees of separation.

During our careers, we will join the same professional and industry organizations, work for the same cluster of organizations, and over time repeatedly cross paths with others in the same field. When two professionals share an industry or region, there’s an excellent chance they’re going to be connected by three or fewer degrees of separation. Often, in fact, it’s just two.

But just how meaningful are these connections?

Let’s throw another number into the equation: 150. Often called “the Dunbar number,” it’s the limit for the number of people whom we can truly know – the ones  we’re most likely to know well and trust. These are the members of your most trusted network.

It might seem like a big crowd, but when it comes to hiring the right candidate, it’s actually quite small a number. Size, however, isn’t what’s important here. The value is in the intimacy of these connections. We understand the strengths and weaknesses of each person in our most trusted network, and it’s this knowledge that helps us recognize fit. Thus, hiring managers can have a high confidence in our recommendations from this group.

What does this mean in practice? An introduction isn’t enough.

What does this mean in practice? An introduction isn’t enough. W­e need to be certain that the person making the referral is tapping their most trusted network. If they are, there’s a much better chance of hiring someone who’s not just good – but great.

There are several ways to ensure this, but one is to be strategic about how you use your extended network. Start by reaching out to the types of professionals who are likely to have larger most trusted networks.

For example, think about CEOs. The average number of connections they have on LinkedIn is 930. Of course, not all of these are people they’re likely to recommend for an open position, but CEOs have access to more reliable intelligence on the qualities of each individual. This makes their recommendation more valuable.

Like CEOs, recruiters have access to credible data about a much larger swath of an industry than most professionals. As a result, they can provide stronger recommendations and better insight about more people in their network.

If you’re looking for a high-caliber professional to fill a challenging role, these two groups should be your starting point. Over the next few months, we’ll explore this fascinating interplay between network size and the role of the most trusted network, and how this dynamic can help you find your next great hire.